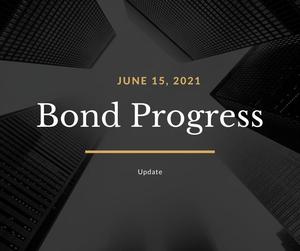 Back in about 2015 a long process began, as the school district worked towards passing a bond measure to improve the safety and security of the Coos Bay Schools. A lot of time and energy went into researching, designing, gathering costs, spreading the word, building support and basically preparing to place a  measure on the November 2017 ballot.  The voters of Coos Bay passed that measure and the school district received approval to sell $59,995,000.00 worth of bonds.  With these funds the district hoped to build a new K-2 school, a new junior high school, and improve safety and security at three other schools.

In the intervening three and a half years, what has that bond actually produced?

Most people think that, when a bond passes, funds are simply extracted from the home-owning population in the form of increased taxes.  What actually happens is a bit more complicated.

Once the bond is secured, the value of it goes up for sale and investors purchase the bond. One of the things that can affect this sale is the school district’s financial rating. Because of the district’s terrific rating (A+!) investors were eager to purchase the bonds and the sales actually brought in additional funds!  Over the life of this bond, additional funds have been added to the construction budget through grants, energy incentives, and interest.

The District opted to sell a portion of the bonds in the original sale.  $40,000,000 went up for sale and, due to that A+ rating, an additional $6 million premium was earned!  That money went directly into the bank, where it earned a pretty awesome rate of interest, which assisted in increasing the available budget.  When the District later decided to sell the remaining $19,995,000.00 everyone was delighted to learn that, once again, the sale brought in ANOTHER $6 million!

But wait! There’s more!  This spring, the school district was informed that, after repeated attempts and lots of hard work, they  were awarded a seismic grant for Madison School, resulting in an additional $2.4 million, to be used specifically to improve safety at that school.

So what has the District done with these funds?

Over the course of the last 3 1/2 years, the community has seen the completion of the brand new Eastside Elementary School, as well as numerous improvements at Millicoma School, including among other things, a new security vestibule, the new drive approach, new covered play area, and the combined playground shared by it and Eastside School. Over on the west side, simultaneously, Sunset School received a beautiful new play structure.

In addition, work began on the new junior high school. In fact, Marshfield Junior High is on schedule to be completed in July of this year and be open in time for the coming school year!As these projects have come in on time and under budget, funds are available for making much needed improvements at the next school on the schedule:  Madison School.

With the savings from Eastside, Millicoma, and Marshfield Junior High, and the additional seismic grant, the District has been able to increase the budget for Madison from the original $8 million to $17 million, which allow the District to make virtually all of the desired, and badly needed, improvements at that school.  This also means we have funds available to focus on the next project:  a security vestibule at Sunset School!

The District has 5 years to complete work on our schools and, 3 ½ years in, we are well on our way to completing the goals we promised our community.  We are very excited with the progress to date and look forward to showing off our new and improved schools to you and all of our community in the coming months and years.