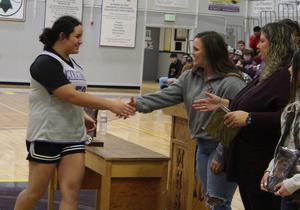 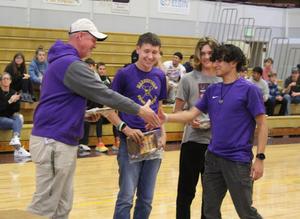 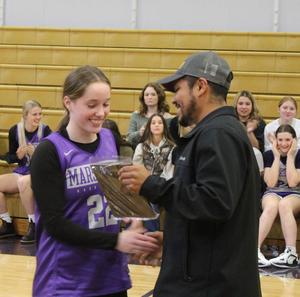 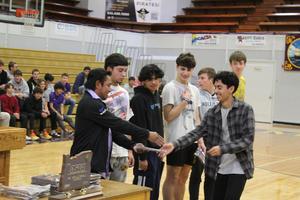 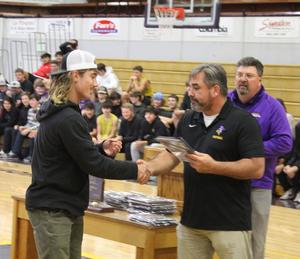 Marshfield High School and the Coos Bay community celebrated the young men and women who recently completed what may be the best fall sports season in school history during the Fall Sports Awards Banquet on Monday.

Athletic Director Greg Mulkey said gathering at the school to recognize the student-athletes was something Marshfield High School enjoys doing.

“It’s very important to recognize the men and women for their athletic accomplishments with team awards,” Mulkey said. “These team awards are voted 100% by their peers. Sometimes the coaches get involved.”

As he spoke about the teams at the event – football, boys and girls soccer, boys cross country and volleyball – Mulkey said the success they had on the might never be repeated.

Just a year ago, Marshfield won a state championship in football, Alex Garcia-Silver won a state title in cross country and the school’s boys soccer and volleyball teams made the playoffs.

But that was just the warmup.

“But this group of athletes and coaches have set a new standard,” Mulkey said. “I think one could at least argue the fall of 2022 may be the best fall in school history.”

This year, both the boys and girls soccer teams made the playoffs, with the girls securing their first-ever postseason win. The Marshfield football team qualified for the playoffs for the ninth consecutive year, and not only did Garcia-Silver repeat as state champion in cross country, but the boys team qualified for state, finishing sixth as a team. And volleyball captured the Class 4A state championship for the first time since the sport was sanctioned 48 years ago.

The coaches for each of the teams then gave out the team awards.